My journey so far… 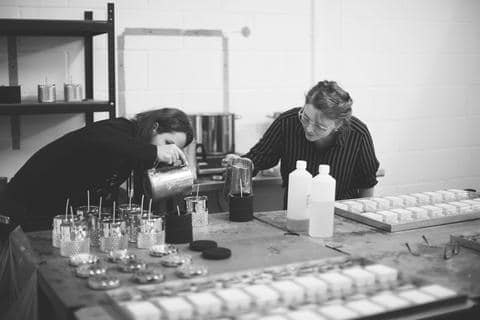 Where to begin… I’m Hannah, 23 years old and a few months ago I started Ava May Aromas from my family home in Fleet. While working a full time job in marketing, I’d grown tired of advising people on how to improve their social media etc and that advice falling on deaf ears.

For eight months I’d had the idea of starting Ava May Aromas, I truly believed there was a real opportunity on Instagram for a candle company to make an impact. Australia is so far ahead of the UK when it comes to candle making and the industry as a whole. Luxury Candle Supplies was the first candle account I came across that truly caught my eye and gave me inspiration. After just under a year, I quit my job and decided it was now or never. With that I built my own basic website (a handy skill I’d picked up), spoke to my parents (who will admit they were seriously sceptical at first) and ordered some jars and wax. Honestly, it was as simple as that.

The wax, scent and wicks arrived and it was time to make our first candle. I’ll spare you every detail but essentially after a little trial and error, and a lot of research we got our method right. Within days it was time to do my first Instagram post – 16th July 2018.

Wow, I had no idea what was coming!

I started out like any other Instagram business – 0 followers. I knew the home interior accounts would be my target audience so I began following and interacting with them in the hopes of making some connections. Kayleigh (@kayleigh.loves.life) and Deanna (the_ogrady_cottage) were among the first really friendly accounts I connected with. Numbers slowly crept up and I began approaching accounts with good followings to see if they’d like to try some of my products in return for an honest review. I can’t even begin to tell you how many I approached that didn’t respond or give me the time of day. This is one of the reasons I like to collaborate with other small businesses just trying to grow and succeed because that was, and still is, me.

Rejection is tough to deal with in the beginning. There were many days that would pass where no orders came through and I’d question EVERYTHING. What was I doing? What was the point? Was this ever going to work? Feelings of failure when orders didn’t come through and the hurt when competitors were unwelcoming and cold. I’ve had to grow a much thicker skin since then – you have to with social media.

“be prepared to give.”

It is no secret that Mrs Hinch has hugely helped my small business explode at a pace I can only describe as lightning speed. However, when people say I ‘just got lucky’ it offends me for reasons I‘ll explain. My Dad has always taught me ‘you create your own luck in life’, and whilst I most definitely hit the jackpot when I stumbled across Sophie’s account, like others, I was prepared to give in the first place. I’ve found the first message I sent to Sophie on 25th July 2018 and it makes me smile thinking of all that has happened since. Little did I know, it was to be the most important message I had ever sent!

I should probably mention that at this point I was living at my parents family home, working on the kitchen hob, creating everything by hand and to order. As the weeks passed and Sophie’s account started to grow, her stories or mentions would send a wave of followers and consequently orders like nothing I’d ever experienced! We were on roughly 7k followers when Sophie started to truly take off. Suddenly, Ava May Aromas was at 10k, then 15k and the orders were coming in thick and fast.

When I started this, I knew I had enough money to last me roughly two months. So I had to decide to either keep this business as a little side hobby or turn it into a full time job. I will always remember my Dad ringing me as the end of the second month approached, telling me that I really needed to get a job. It was time to start paying my way again and I couldn’t rely on the candles alone. It was around this point Sophie was really growing and she mentioned me in her stories a couple of times that week. Orders boomed and by Thursday my Dad was on the phone again. But this time, telling me not to go to the interview I had scheduled for the following day. This was a significant turning point for Ava May Aromas.

As the orders continued to grow, I was still very much on my own. These were some of the toughest weeks both mentally and physically. I’d be up at 6am and not go to bed until the early hours. I was so determined to make sure I got orders out in time for the post the following day. Thank goodness for the Post Office just round the corner from our house and the lovely couple who run it. I still remember my first trip, telling them all about my venture. I had about three parcels in my arms at the time, gradually that turned into carrier bags and the daily trip turned into two or three trips before I knew it.

I can’t remember exactly when or why I started doing wax melts, I suppose I’d seen them around and recognised they were an affordable option over more expensive candles. One thing I knew for sure is I had no idea what I was doing when it came to making them but with some research and practice I soon had my first batch! Now not only was the kitchen taken over, so was the dining room, living room, hallway, dining room, my sisters bedroom… quickly I was running out of space!

During this time a friend of many years Owen, messaged to say he was back in town visiting family. He asked to meet and catch up and whilst I’d love too, I couldn’t leave the house due to the number of orders I needed to complete. Owen popped over and saw the state I and the house were in, so he offered to lend a hand for the next few days. Long story short he never left! He was my first full time member of staff and helped through some very stressful weeks where it was a mad rush to get orders out the door.

It was around this point the mess was really starting to affect us all. My parents sat me down one morning and spoke about finding a workshop or unit, this terrified me. We’d discussed this as being a possibility in the new year, not after 2 months! In my head that meant the frightening prospect of many overheads I hadn’t needed to consider from the safety of home. Panic started to creep with the thought of bills to pay, wages to cover and what if orders didn’t increase to cover the extras?!

However, I’m extremely lucky to have an extremely encouraging father and business partner with 30+ years experience. We both knew at this point with expansion happening so rapidly that I was going to need him to be far more involved. Within two days he’d found the perfect workshop space. We got lucky finding a spot in Andover, a 40 minute drive from home. 1200sqft seemed massive when we first moved in. If you watch the highlights reel on my Instagram profile and click on the Workshop file you’ll see that it was just an empty shell!

Suddenly two cookers became six and two staff members grew to six. Lots of shelving units began to appear and my poor old dad once again had to put them together. My mum, sister and boyfriend would also come along in their spare time to lend a hand whenever they could. The biggest relief was without doubt suddenly having spare hands to make and pack more. As much as taking on staff was a terrifying thing to do, it was exactly what we needed. When your production is limited, so are your orders. I was still spending seven days a week in the workshop at this point, and would often be there until 8 or 9pm, BUT it was an improvement from having it all in the house.

Now it was time for my reps! It was so hard choosing from so many entries, but I could not have been luckier. Roisin, Deanna, Carly and Holly have all been utterly amazing. Together with Sophie, these ladies have been a huge part of my brands growth through their stories, posts and wonderful comments – I could not be more grateful for them. We also had the FAB-U-LOUS Mario join us – I watched a few of his stories and that was it. I had to have him as a rep and safe to say he has well and truly fitted in with my team. Thank you for everything guys!

Despite having a wonderful team, it still wasn’t enough and so we began to look for Christmas temps to join us. Suddenly 1200sqft went from feeling spacious to pretty cosy. With the product range expanding to include room sprays, reed diffuser refills and the space then needed for labelling clams, finding a work space in between the wax being melted and poured and orders being packed, became a huge challenge. Thankfully, the unit next door became available and answered our prayers, temporarily.

This extra space gave us a vital room for a ‘prep area’ and more packing storage. Next the french doors were fitted to the front of the unit, so goods can flow out when Hermes collect each day. Plus new heating units came just in time for the winter!

Presently, we have a 1700sqft workshop space, a wax melting capacity of 240 litres per day and we’ve just passed 10,000 sales on our Shopify store! We’re averaging about 1,000 orders a week which I’m so proud of. I’m so grateful for all my staff, my family and insta family that support us daily and have helped this dream become a reality.

Not bad for a hobby!